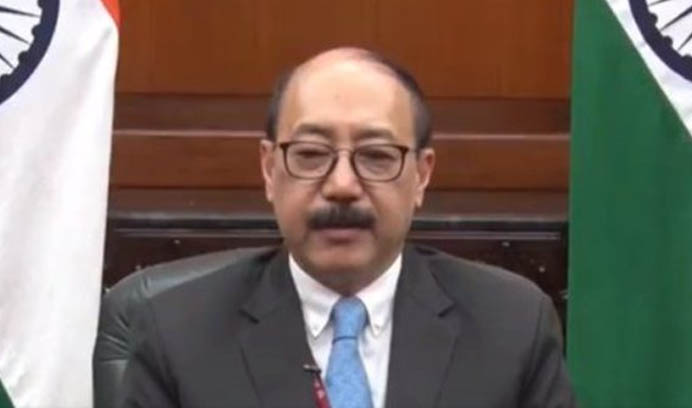 Foreign Secretary Harsh Vardhan Shringla on Monday briefed a select group of Heads of Missions on the planned terrorist attack in the Union Territory of Jammu and Kashmir’s Nagrota district which was foiled on November 19 and the implications of the incident on security, diplomacy and the battle against terrorism.

The idea was to share information as widely as possible with the international community, sources said.

The Heads of Missions were provided with a detailed information docket giving the details of the incident as it transpired as well as a list of items and munitions that were recovered from terrorists clearly indicating their Pakistani origins.

They were also briefed on how the terrorists got into India which is now clear through the discovery of an underground tunnel in the Samba sector.

It was shared with them how preliminary investigations by the police and intelligence authorities, markings on the recovered AK47 rifles and other items lead us to believe that the terrorists belonged to Pakistan based Jaish-e- Mohammad.

It was pointed out how the incident of November 19 was part of Pakistan’s ongoing terror campaign in Jammu and Kashmir and that in the year 2020 itself India has witnessed 200 incidents of terrorist violence and neutralization of 199 terrorists.

Details of JeM’s involvement in previous such incidents were also shared with the foreign envoys.

In terms of the bigger picture, it was clear that the terrorists were planning the biggest terror attack in India since Pulwama in February 2019 and the implications can be guessed.

This was part of terrorists’ ongoing efforts to sabotage the DDC elections and to carry out a terror attack aimed to coincide with the anniversary of 26/11 Mumbai terror strikes.

The Heads of Missions were sensitized about India’s concerns regarding Pakistan’s sustained efforts to destabilize the situation in J&K and to subvert local elections and democracy.