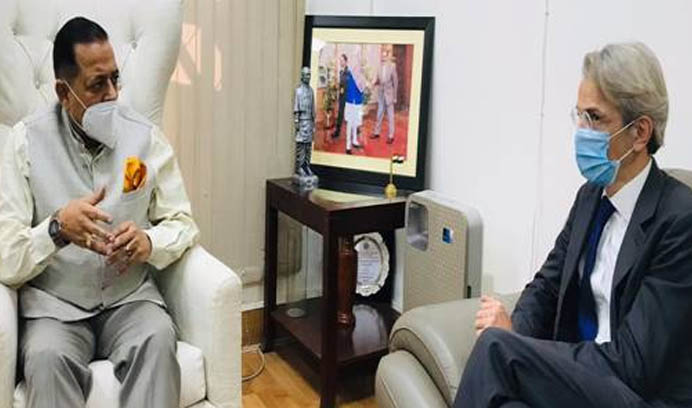 He said that France is also interested in exploring tourism and other potentials in Jammu & Kashmir. Lenain had visited the Valley earlier this year when he joined the group of Ambassadors visiting the Union Territory of J&K.

In response, Dr Jitendra Singh told him there were vast areas of unexplored potential which were waiting to be explored. These, he said, included tourism, handicraft, handloom as well as food and fruit sectors.

India has laid great emphasis on the North Eastern region and several collaborative initiatives have been undertaken, he pointed out. As part of the government’s efforts, the Centre of Excellence Citrus Fruit Park has been set up at Mizoram with Israeli collaboration while there was collaboration with Japan in some of the infrastructural works.

During the meeting, Singh added that India has also reoriented its “Look East Policy” into the “Act-East” policy and has taken a number of steps to increase engagement with the countries across the eastern borders. In this regard, the Indo-Bangladesh Agreement on the exchange of Enclaves.

While this particular meeting focused on the North Eastern region and Kashmir, France and India have collaborated in many sectors over the years, including in the field of Artificial Intelligence (AI).

Lenain wrote on Twitter a few days ago, “Extremely proud that India’s fastest supercomputer, provided by French company @Atos, ranks #63 in the world’s #TOP500! It shows that France and India working together can be leaders in AI and cutting-edge invocation.”

Earlier, announcing the French participation in the Bengaluru Tech Summit 2020, he had said Karnataka was home to over 150 French companies.