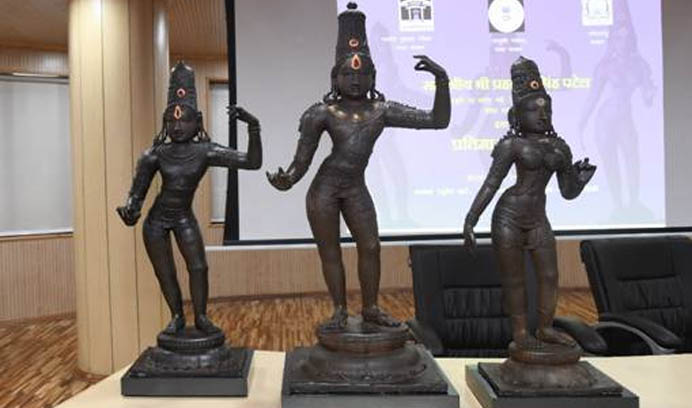 The idols are masterpieces of Indian Metal Art. (Source: PIB)

Stolen 13th century bronze idols of Lord Rama, Lakshmana, and Goddess Sita which were recovered in the UK recently were handed back to the Tamil Nadu Idol Wing by Union Culture Minister Prahlad Singh Patel on Wednesday. They had been stolen from a temple in Tamil Nadu in 1978.

The idols were handed over at a ceremony held at the Archaeological Survey of India (ASI) headquarters in Delhi in the presence of senior officials from the Ministry of Culture, ASI, and Government of Tamil Nadu.

These bronze idols were handed over to the High Commission of India in London by the Metropolitan Police of London on September 15.

The bronze idols of Lord Rama, Lakshmana, and Goddess Sita are masterpieces of Indian Metal Art and are 90.5 cm, 78 cm, and 74.5 cm in height respectively. Stylistically, these sculptures are dated to the 13th century AD.

As per the photo documentation done in 1958, these idols belong to the Rajagopal Vishnu Temple in Anandamangalam in the Nagapattinam district of Tamil Nadu. The three idols, along with a fourth one of Hanumana, were reported stolen from this temple in 1978, according to the investigation carried out by the Idol wing of Tamil Nadu Police.

During the handing over ceremony in Delhi today, the Union Culture Minister congratulated the Archaeological Survey of India, Special Idol Wing, Government of Tamil Nadu, DRI, and High Commission of India, London for their continuous efforts in bringing these idols back to the country.

The Minister highlighted that a total of 40 antiquities have been retrieved from foreign countries to India since 2014.