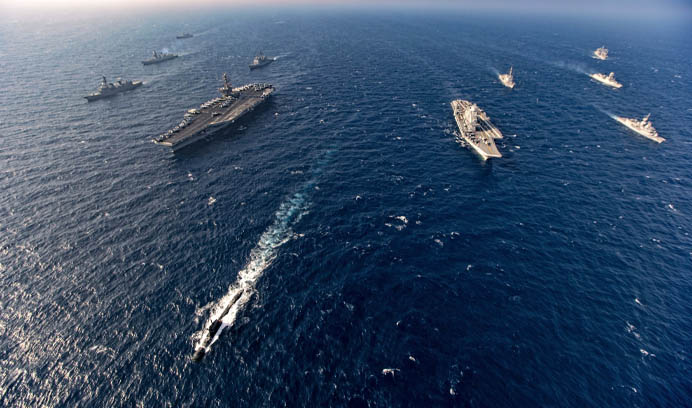 All four Quad countries are participating in the exercise.

The second phase of Malabar Exercise 2020, the important multilateral exercise of the Quadrilateral countries, continued in the Arabian Sea for the second day on Wednesday.

The four-day exercise, involving two carriers, along with other ships, submarines, and aircraft of the participating navies, will take forward the synergy of the Phase 1 exercise, which was conducted in early November.

The major highlight of the exercise, involving Japan, India, Australia, and the United States, is the participation of the Indian Navy’s Vikramaditya carrier battle group and the Nimitz strike group of the US Navy. The USS Nimitz is the world’s largest warship.

The Australian Navy has deployed its HMAS Ballarat, an Anzac-class frigate while the Japanese Navy has sent its leading destroyer JS Murasame for the exercise.

The Indian Navy shared the pictures of the exercise. “aircraft carriers INS Vikramaditya & USS Nimitz operating in formation with @Australian_Navy's HMAS Ballarat, @JMSDF_PAO's JS Murasame & other units of #IndianNavy & @USNavy,” the Spokesperson of the Indian Navy said in a tweet.

The first phase of the Malabar Exercise 2020 was conducted in the Bay of Bengal from November 3 to November 6.

The Japanese navy revealed that Japan is conducting various tactical exercises with the members of the Quad.

The Australian Navy also posted an update on Twitter.

“Phase Two of #ExerciseMALABAR 2020 commences in the Indian Ocean, with #HMASBallarat sailing in formation with close regional partners @indiannavy Flag of India @USNavy Flag of the United States and @jmsdf_pao_eng Flag of Japan #AusNavy #YourADF,” the Australian Navy said in a tweet.

The Malabar, which started in 1992 as a bilateral exercise between India and the United States, welcomed Japan as a permanent member in 2015. Australia had last participated in 2007.

The mega exercise is taking place at a time when India and China are involved in an over-six-month military standoff in eastern Ladakh. The participants of Malabar Exercise 2020 collectively support free, open, and inclusive Indo-Pacific and remain committed to a rules-based international order.