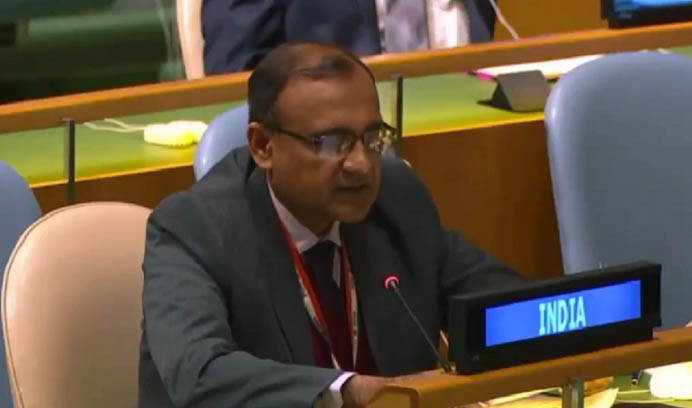 India has said that the United Nations Security Council (UNSC) had become an “impaired organ” and had failed to act credibly due to its unrepresentative nature.

India’s Permanent Representative to the UN TS Tirumurti made the remark on Monday, asserting that a handful of countries are using the Inter-Governmental Negotiations (IGN) as a "smoke-screen" and stopping progress on reforming the Security Council.

Speaking at the 75th session of the United Nations General Assembly, Tirumurti said, "Today's Security Council is an impaired organ. It has been unable to act with credibility essentially due to its unrepresentative nature. But then, what is happening inside the IGN process, which we seem to be wedded to?"

“Inside the IGN, nothing has moved for more than a decade except impassioned statement for the need to reform. In fact, it has not progressed since it is not only informal but it has no rules of procedure and has no records. For a decade, it has remained that way. We are forced to keep our own notes placing a tremendous burden on all small and medium states,” he added.

Without taking names, Tirumurti said “a handful of countries” were stopping the Intergovernmental Negotiations framework from progressing. “They are using the IGN as a smoke-screen to stop themselves from being identified by paying lip-service to Security Council reform,” he added.

“The same countries who shed crocodile tears for small and medium states are the same ones they didn’t even have the basic courtesy which is to help them get official records of discussions. What happens here is a new record and we start again the next year as if nothing has happened and of course we don’t have a single negotiating text,” Tirumurti added.

Criticizing the absence of even a single negotiating text, Tirumurti said that the IGN has become like a "platform for debate in a University rather than a serious result-oriented process in the United Nations consisting of sovereign member states.”

"The conditions they are laying out are impossible to fulfill which is a full consensus of all member states. Ironically, this is happening at a time when we were in a tearing hurry last week to give ourselves e-voting rights. But for IGN, they want no voting, leave alone e-voting, but only full consensus!" he said.

Tirumurti said that several world leaders, including Prime Minister Narendra Modi, had called for urgent reforms within the Security Council. “Prime Minister Modi, echoing the aspirations of over a billion of my fellow citizens, asked, when will this reform-process ever reach its logical conclusion?” Tirumurti said. “The question that we are still asking here in IGN today is when will the reform process ever begin?”

Speaking about the reforms India wants to see in the UNSC, Tirumurti said, “Firstly, we want the application of the general assembly rules of procedure to the IGN to bring about an open, inclusive and transparent process.”

Further, he said, India calls for text-based negotiations to start and text reflecting all positions and propositions of member states will be necessary to make progress.

“Thirdly, let us reaffirm our firm support for a common African position as specified in the Ezulwini consensus,” he said.

The ambassador called for wider representation in the UN Security Council.

“We believe that the vast majority of member states are, like us, in favor of expansion in both – permanent and non-permanent – categories of membership of the Security Council,” he said. “We need to ask for greater representation for all those who deserve to be in the Security Council, including Africa, Latin America, and others. For all this, we need a serious and credible process.”

Asserting that there is a need for a decisive movement this year in the UNSC reform process, Tirumurti said: "Without decisive movement, I feel that those who support real reform and who wish to deliver on the commitment made by our leaders, will be forced to look beyond the IGN, maybe to this very Assembly, for results. If that happens, we must not hesitate in taking a relook at the IGN process itself."