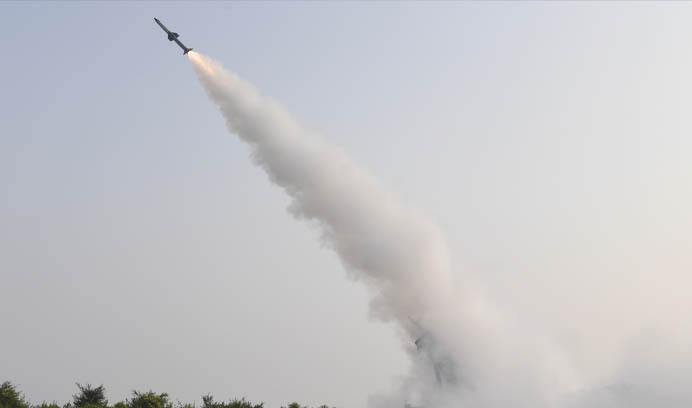 The missile was tested off the coast of Odisha.

In a major demonstration of India's indigenous defence capabilities, the Quick Reaction Surface to Air Missile (QRSAM) System on Tuesday tracked an unmanned aerial target accurately and successfully destroyed it during the second test in less than a week.

The flight test was was conducted at about 3.42 PM from the Integrated Test Range, Chandipur, off the coast of Odisha. The test was was once again carried out against the high performance Jet Unmanned Aerial Target called Banshee, which simulates an aircraft.

The first successful QRSAM flight test had been conducted on November 13, achieving the milestone of a direct hit. The second test proved the performance parameters of the warhead, the Ministry of Defence said in a statement.

The fully-indigenous missile system is capable of detecting and tracking targets on the move and engaging them with short halts. The Missile is canisterised which means that it can be transported and launched using a mobile launcher. The launcher can carry six canisterised missiles to strike multiple targets.

The system is designed to give air defence coverage to strike columns of the Indian Army and has been made by Indian defence units in the public sector as well as private industry.

According to the statement issued after the second successful test, the Radars acquired the target from a long range and tracked it till the mission computer automatically launched the missile.

"Congratulations to @DRDO_India for two back to back successful test trials of Quick Reaction Surface to Air Missile.
First launch test on 13th Nov proved the Radar and Missile capabilities with direct hit. Today’s test demonstrated the warhead performance on proximity detection," Singh wrote on Twitter.

Congratulations to @DRDO_India for two back to back successful test trials of Quick Reaction Surface to Air Missile.


The flight test was conducted in the deployment configuration of the weapon system consisting of Launcher, fully Automated Command and Control System, Surveillance System and Multi Function Radars. The QRSAM weapon system, which can operate on the move, consists of all indigenously developed subsystems.

"All objectives of the test were fully met. The launch was carried out in the presence of the users from Indian Army," the statement said.

A number of range instruments like Radar, Telemetry and Electro Optical Sensors were deployed which captured the complete flight data and verified the performance of the missile.

Teams from ARDE and R&DE(E) from Pune, LRDE Bengaluru, and IRDE Dehradun in addition to the Missile Complex Laboratories from Hyderabad and Balasore participated in the test. Secretary DDR&D & Chairman DRDO Dr G Satheesh Reddy congratulated all the teams who worked on the QRSAM project.