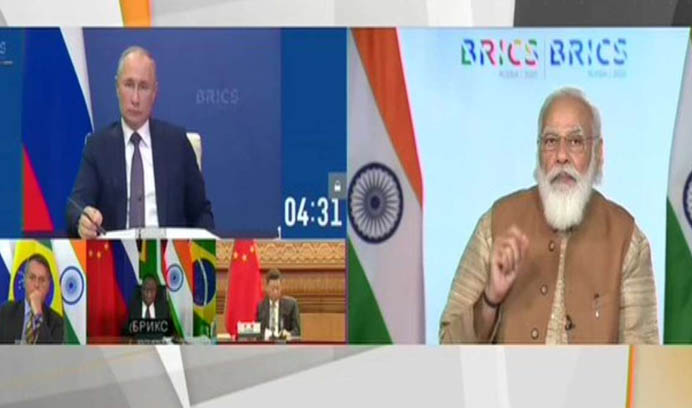 ‘We have to ensure that the countries that support and assist the terrorists are also held guilty,’ PM Modi said

In his address at the 12th BRICS summit hosted by Russian President Vladimir Putin, Prime Minister Narendra Modi on Tuesday identified terrorism as the “biggest problem” facing the world and asserted that there was a need to tackle the menace in an “organised manner”. The five-nation group held its summit in a virtual format.

Without taking name of any country, he said, “Terrorism is the biggest problem the world is facing. We have to ensure that the countries that support and assist the terrorists are also held guilty.”

He exuded confidence in India’s vaccine production and delivery capabilities in the fight against the deadly Covid-19 pandemic.

“We have started a comprehensive reform process under the ‘Self-reliant India’ campaign. The campaign is based on the belief that a self-reliant and resilient India post-Covid can be a force multiplier for the global economy and make a strong contribution to the global value chains,” the Prime Minister said

Emphasising his point, PM Modi said, “We also saw an example during Covid, when we were able to send essential medicines to more than 150 countries due to the capability of the Indian pharma industry. Our vaccine production and delivery capacity will also work in the interest of humanity like this.”

Prime Minister Modi also underlined the need for reform of the United Nations Security Council as well as multilateral bodies like the World Trade Organisation and the International Monetary Fund.

This was the second time that Prime Minister Modi and Chinese President Xi Jinping shared the virtual platform this month.

On November 10, both leaders had shared the platform at the Shanghai Cooperation Organisation (SCO) summit, where Modi had said that all member nations of the SCO should respect each others’ sovereignty and territorial integrity. This he had said in an oblique reference to China whose expansionist move in eastern Ladakh saw India-China locked in bitter standoff since early May this year.