Malabar Exercise 2020: Phase 2 of naval drill to begin in Arabian Sea on November 17 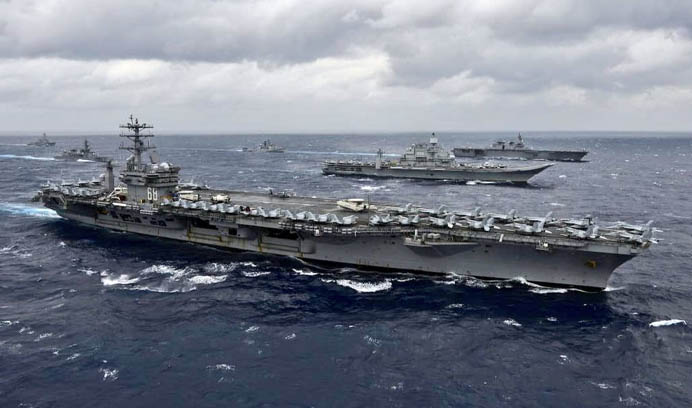 File photo of the first phase of the exercise held earlier this month.

The second phase of the Malabar Exercise 2020, the naval drill involving Australia, India, Japan, and the United States, will be conducted in the Northern Arabian Sea from November 17 to November 20.

It is an important multilateral exercise involving Quadrilateral countries sending a strong message to China at a time when India and China are involved in an over-six-month military standoff in eastern Ladakh.

The second phase will witness joint operations, centered around the Vikramaditya Carrier Battle Group of the Indian Navy and Nimitz Carrier Strike Group of the US Navy, according to an official release.

“The two carriers, along with other ships, submarine, and aircraft of the participating navies, would be engaged in high-intensity naval operations over four days. These exercises include cross-deck flying operations and advanced air defense exercises by MIG 29K fighters of Vikramaditya and F-18 fighters and E2C Hawkeye from Nimitz. In addition, advanced surface and anti-submarine warfare exercises, seamanship evolutions, and weapon firings will also be undertaken to further enhance interoperability and synergy between the four friendly navies,” said the statement.

The indigenously built submarine Khanderi and Navy’s P8I maritime reconnaissance Poseidon aircraft will also showcase their capabilities during the exercise.

The first phase of the Malabar Exercise was conducted in the Bay of Bengal from November 3 to November 6.

The Malabar, which started in 1992 as a bilateral exercise between India and the United States, welcomed Japan as a permanent member in 2015. Australia had last participated in 2007.

At a time when India and China are involved in a long and tense standoff at the border, Australia’s participation in MALABAR 20 will play a key role. The participants of Exercise Malabar 2020 collectively support free, open, and inclusive Indo-Pacific and remain committed to a rules-based international order.