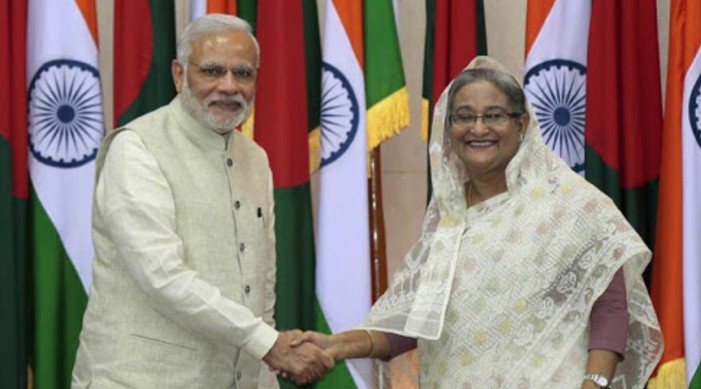 Prime Minister Narendra Modi is likely to hold a virtual summit with his Bangladeshi counterpart Sheikh Hasina in the third week of December, Bangladeshi foreign ministry official was quoted by an Indian news agency as saying.

Expected to be held between December 16 and 17, the virtual summit between the two leaders may see signing of various bilateral agreements.

Remember, Bangladesh has also invited PM Modi to join the celebrations on the occasion of its Independence Day on March 26 and PM Modi is likely to visit the neighbouring country physically.

Indian Ambassador to Bangladesh Vikram Doraiswami said that the virtual summit in December cannot be seen as a substitute of his physical visit to Bangladesh.

The meeting between the leaders of two nations can give a boost to the existing relationship between the two countries with important agreements lined up to be signed during the upcoming meeting. These include agreements to enhance trade and commerce, treaties on river water, road communication and many more.

In fact, the countries can sign an agreement for a Special Economic Zone (SEZ) during the meeting scheduled in December. According to some media reports, the agreement for the SEZ will be signed between Bangladesh Economic Zones Authority (Beza) and Exim Bank of India.

As per the proposal, the SEZ is to be set up on 1,000 acres of land, and will be exclusively for Indian investors. For the project, India approved US $115 million in June under its third line of credit worth US$ 4.5 billion. The construction is expected to be completed by June 2021 while the factories will go into operation by 2023.

The final draft of the agreement has already been prepared and shared with India, media reports said.

Similarly, the long-delayed Joint Rivers Commission (JRC) meeting between India and Bangladesh might take place before the summit scheduled in December.

The meeting is being planned as it was decided during the 6th Joint Consultative Commission meeting held on September 29.

Ministry of External Affairs (MEA) spokesperson Anurag Srivastava in a statement said that the authorities are planning to hold a JRC meeting.

He said, “During the recently held Joint Consultative Commission meeting between the two Foreign Ministers, they urged the concerned authorities to consider convening the ministerial level JRC meeting. I understand both sides are in discussion on this.”

It was also emphasised by Indian Ambassador to Bangladesh after he took office last month. He reiterated India’s stand during his meeting with the State Minister for Water Resources for Bangladesh, Zahid Faruk last month.

Talking to the press in his first press briefing as the Indian Envoy to Bangladesh, he said, “Let me stress that Bangladesh is, was and will always be a very special partner of India.”

In a significant step towards boosting India-Bangladesh maritime connectivity and trade ties, the first-ever commercial shipment from Bangladesh reached Assam, India via the river route on November 07.

It was for the first time that Bangladesh had allowed its ports to be used as a transit for cargo movement to India's north-eastern states.

India and Bangladesh signed a coastal shipping agreement in 2015 and the nations have since then worked towards expanding the maritime connectivity. As part of it, a new port of call and routes were added to an already available protocol on Inland Water Trade and Transit in May 2020.

Not just that, India has always considered Bangladesh as an important part of its ‘Neighbourhood First’ Policy.

It was resonated in the Foreign Secretary Harsh Vardhan Shringla’s recent visit to Dhaka where he met with Bangladeshi PM Sheikh Hasina and discussed ways to fight the COVID-19 pandemic together.

As far as COVID-19 is concerned, both nations have agreed to work closely to contain the contagion. In fact, on November 05, a Memorandum of Understanding (MoU) was signed between the Serum Institute of India and Beximco Pharma of Bangladesh to provide 30 million doses of the vaccine to Bangladesh.

During the Foreign Secretary’s visit, both sides discussed various aspects of the bilateral relationship including
development partnership and enhancing connectivity.