WHO chooses India for Global Centre for Traditional Medicine 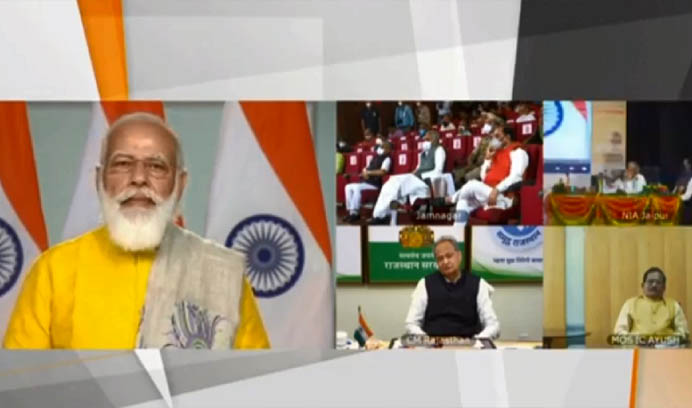 The World Health Organization is establishing the WHO Global Centre on Traditional Medicine in India, Prime Minister Narendra Modi said on Friday, expressing gratitude towards WHO and its Director-General Tedros Adhanom Ghebreyesus.

Speaking after inaugurating the Institute of Teaching and Research in Ayurveda, Jamnagar (Gujarat) and National Institute of Ayurveda, Jaipur (Rajasthan), via video conferencing on Ayurveda Day today, the Prime Minister said, “World Health Organisation is establishing the WHO Global Centre on Traditional Medicine in India, to strengthen the research on traditional medicines.”

The Prime Minister thanked WHO and the DG for choosing India for the Global Centre of Traditional medicine.
"It is a matter of pride for all Indians that the WHO has chosen India for establishing its Global Centre for Traditional Medicine. Now work will be done in this direction from India," Modi said.

"I would like to thank the WHO and particularly its Director-General Tedros for giving this responsibility to India. I am confident that just like India has emerged as the pharmacy of the world, in the same manner, this centre for traditional medicine will become the centre for global wellness," he said.

Speaking at the event, the Prime Minister stressed the need to bring the Ayurveda knowledge out of books, scriptures, and home remedies and develop this ancient knowledge as per modern needs. He remarked that new research is being done in the country by combining the information received from the modern science of the 21st century with our ancient medical knowledge.

Pointing out that the demand for Ayurvedic products has increased globally, the Prime Minister said the Exports of Ayurvedic products increased by about 45 percent in September this year compared to the previous year. He added the significant increase in the export of spices like turmeric, ginger, considered as immunity boosters, shows the sudden boost in confidence in Ayurvedic solutions and Indian spices in the world.

He said during this Corona period, the focus was not only limited to the use of Ayurveda alone but used to advance research related to AYUSH in the country and the world. On one hand, India is testing vaccines, on the other, it is also increasing international cooperation on Ayurvedic research to fight COVID, PM Modi said.

The Prime Minister urged the Ministry of Agriculture, the Ministry of AYUSH, or other departments, to work together to increase awareness of the usefulness of many herbs available in India. He stressed that the development of the entire ecosystem related to Ayurveda will also promote tourism related to health and wellness in the country. He wished that the two institutions inaugurated today in Jamnagar and Jaipur will prove beneficial in this direction as well.