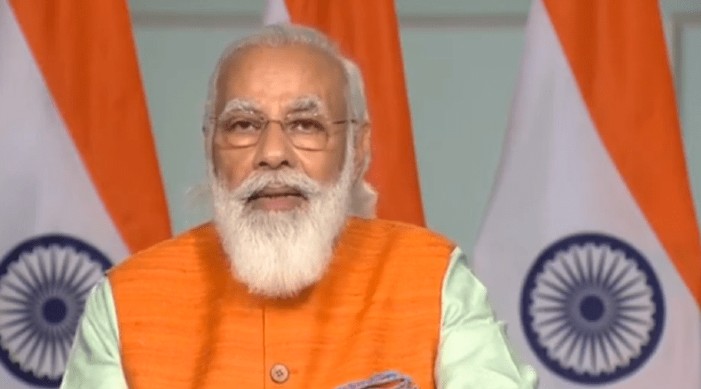 Screengrab of the video of PM Modi unveiling the statue

Prioritising ideology over national interest is always harmful for the democratic system of the country, Prime Minister Narendra Modi said while unveiling Swami Vivekananda’s statue in JNU campus through video conference on November 12.

“Because my ideology says this, so in matters of national interest, I will think in the same framework, I will work on the same parameter, this is wrong,” the Prime Minister said.

Whenever there is a question of national unity, integrity and national interest, taking decisions under the burden of any ideology will lead to the loss for the nation.

He said it is natural to be proud of one’s ideology still, “on the subjects of national interest, our ideology should be seen standing with the nation not against it.

Talking about the legacy of India to unite during difficult times, he said, whenever a difficult time arose before the country, people of every ideology came together in the national interest.


He said that it is a matter of immense pride that a statue of Swami Vivekananda is being unveiled at JNU. He added this statue would teach compassion, which is the mainstay of Swamiji's philosophy.


Matter of immense pride that a Swami Vivekananda statue is being unveiled in JNU. https://t.co/OvXTVpPWMe


PM Modi encouraged students to come up with fresh ideas saying that the flow of new ideas needs to be kept uninterrupted. He said that India is a land where seeds of different intellectual ideas have sprouted and thrived. It is necessary for the youth to strengthen this tradition.

PM Modi said that the idea of Atmanirbhar Bharat has become the collective consciousness of more than 130 crore Indians, has become part of the aspirations of the nation. He said that the reforms that the government has undertaken are now manifesting into growth.

He said the poor were the most neglected, most unconnected and most financially excluded person earlier. He added now the poor are getting their own pucca house, toilet, electricity, gas, clean drinking water, digital banking, affordable mobile connectivity and fast internet connection.

Similarly, through better irrigation infrastructure, modernization of mandis, E-Nam, soil health cards, availability of urea better MSP a safety network was created around the farmers. The government first worked for their needs, now it is working for their aspiration, he said.

The Education Minister also said that the statue will remind the future generations about his values, philosophy and thoughts about the country. He said that PM Modi has given the nation a vision to make India a 'global superpower of knowledge' and a 'mission' is to create 'global citizens'.

The Education Minister also congratulated JNU for securing one of the top places in the national university ranking released recently.