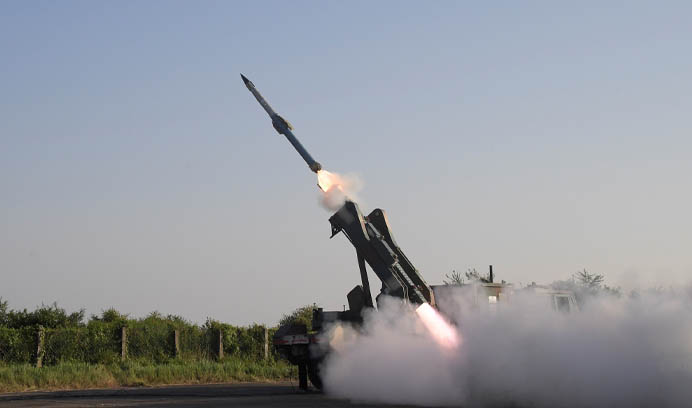 The missile was tested off the coast of Odisha.

In a big boost to the country's defence capabilities, India's Quick Reaction Surface to Air Missile (QRSAM) System on Friday achieved a major milestone by a direct hit to a pilotless target aircraft. The hit was recorded at medium range & medium altitude.

The system is capable of detecting and tracking targets on the move and engaging the target with short halts. The system is designed to give air defence coverage against strike columns of the Indian Army, the Ministry of Defence said in a statement after the launch.

The missile was launched from the Interim Test Range in Chandipur off the Odisha coast.

According to the statement, the missile is propelled by a single stage solid propellant rocket motor and uses all indigenous subsystems. The Missile is canisterised which means that it can be transported and launched using a mobile launcher. The launcher can carry six canisterised missiles to strike multiple targets.

Describing manoeuvre, the statement said the the radar tracked the Banshee Pilotless Target aircraft from its farthest range and the missile was launched when the target was within the kill zone, where it could be hit.

Various laboratories of the Defence Research and Development Organisation were part of the test. The weapon system components have been made by defence units in the public sector as well as private industry.