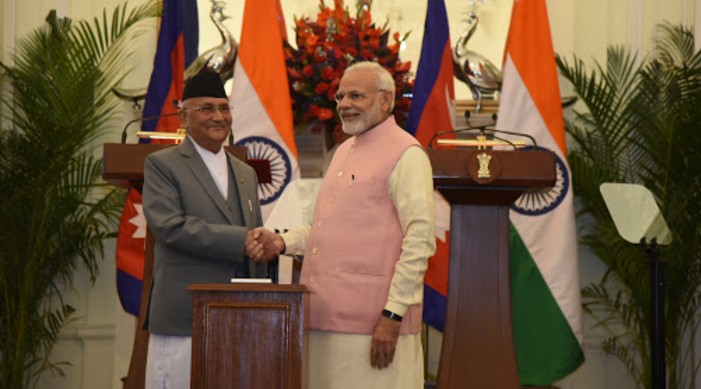 A few days ahead of Foreign Secretary Harsh Vardhan Shringla’s visit to Nepal, New Delhi and Kathmandu on Thursday jointly launched the construction of a Rs 147.12-crore integrated check post (ICP) at Nepalgunj with an aim to streamline cross-border trade, a move that will strengthen bilateral ties between both sides.

Commerce minister Piyush Goyal and Nepal’s urban development minister Krishna Gopal Shrestha witnessed the groundbreaking ceremony to mark the beginning of construction of the ICP, which will smoothen the cross-border movement of cargo trucks by bringing customs and immigration facilities under one roof, according to the Indian embassy in Nepal.


This will be the third ICP on the India-Nepal border and similar facilities at Birgunj and Biratnagar were operationalized in April 2018 and January 2020.

As a part of its ‘Neighborhood First’ policy, the Indian government will take up the construction of a fourth ICP at Bhairahawa in Nepal with Indian funding. The modalities for this project and the implementing agency are under consideration, Goyal said.

Goyal highlighted that India and Nepal have an increasing trend of commercial engagements and ICP Nepalgunj will serve as a catalyst in further deepening engagements.


(9/10) Min. Goyal highlighted India & Nepal have increasing trend of commercial engagements, ICP Nepalgunj will serve as a catalyst in further deepening engagements, ICP at Birgunj & Biratnagar have been facilitating more than 60% of land border trade between 2 close neighbours.


Nepal Minister Krishna Gopal Shrestha thanked the Indian government for the construction of the ICPs in Nepal and expressed happiness on the commencement of the construction work of the Nepalgunj ICP. He said that it is an “excellent example” of cooperation between the two sides.


(4/10) Minister Krishna Gopal Shrestha thanked GoI for construction of Integrated Check Posts in Nepal. Expressed happiness on commencement of work on ICP Nepalgunj, which is the 3rd ICP being built by GoI in Nepal. #IndiaNepalFriendship @PMOIndia @MEAIndia @AmbVMKwatra


The ICP at Nepalgunj will have export and import cargo handling facilities such as warehousing, refrigerated cargo facilities, medical, plant, and animal quarantine areas, and amenities for drivers and passengers. It will also have extensive security systems, including CCTV cameras, round the clock power backup, and wastewater treatment facilities.

“The facility is envisaged to promote a systematic approach to cargo handling and, therefore, will result in saving of time and inconvenience to visitors and reduce overall transaction costs for cross-border trade and commerce,” the Indian embassy in Kathmandu said in a statement.

The project on the Nepal side will be implemented by a Pune-based company under the supervision of state-run RITES International Ltd within two years, while the portion on the Indian side is being built at Rupaidiha by Lands Ports Authority of India, said the Indian embassy in Nepal in a statement.

During the construction period, the Nepalgunj project is expected to create local employment and boost the economy through the supply of raw materials and items from Nepal’s markets.

The creation of advanced cross-border logistics and infrastructure facilities over the past three years has boosted connectivity and mutually beneficial trade and people-to-people ties, the Indian embassy said.

Shringla is expected to visit Nepal during November 26-27, close on the heels of a two-day trip to Kathmandu last week by the Indian Army chief, Gen MM Naravane, to take forward ties.

The visit could see India committing to help Nepal with coronavirus vaccines once its production begins. Also, the two sides will discuss the revival of the Pancheshwar multi-purpose project on river Mahakali as well as other hydro-electric projects.

Both countries had been working behind the scenes to put the bilateral relationship back on an even keel against the backdrop of the India-China border standoff in the Ladakh sector.

India and Nepal share over 1850 km long border which is characterized by a unique and long tradition of free movement of people. India has traditionally been Nepal’s largest trading partner. Presently, over 65% of Nepal’s trade is with India and also over 65% of Nepal’s exports are to India.

Realizing the constraints of existing facilities and its impact on traffic, regulatory process & surveillance at the existing bilateral trade routes, on 3rd August 2005, India and Nepal agreed to develop ‘Integrated Check-Posts or ICPs for the integrated development of land border area by establishing systematically planned, properly inter-connected and efficiently managed border check-posts at the authorized border crossing points between the two countries.

These ICPs were envisaged to put in place systematically planned, properly inter-connected and efficiently managed border check-posts to facilitate movement of traffic and enhance trade between the two countries.

Earlier in August 2009, CCS approved the construction of Integrated Check Posts at Birgunj and Biratnagar in Nepal under Government of India funding through MEA. RITES was identified by MEA as the Project Management Consultant (PMC) for both the ICPs.

These ICP facilities at Birgunj and Biratnagar (with Bihar border) which are now operational were jointly inaugurated by Prime Ministers of India and Nepal on April 7, 2018 and January 21, 2020 respectively through video conferencing. The Intermodal Transport Development Board (NITBD) (under the Ministry of Industry, Commerce and Supplies) or an agency identified by it has been operating and managing ICPs at Birgunj and Biratnagar.

On the Indian side, the Land Port Authority (LPAI), which is under MHA, has created mirror ICP facilities at Raxaul and Jogbani and they are operational.

Under Phase II, the ICP at Nepalgunj and Bhairahawa are being developed with GoI funding, through MEA, along the India-Nepal border. LPAI is also creating mirror ICPs on the Indian side in Uttar Pradesh at Rupaidiha and Sunauli respectively. ICP Nepalgunj is the third largest land revenue collection custom office of Nepal.

The Detailed Engineering Reports of ICPs at Nepalgunj and Bhairahawa (both on Nepal side) were prepared by RITES and finalized after taking into account observations of the Government of Nepal. Through a tender process the MEA identified RITES as the Project Management Consultant (PMC) for the Nepalgunj project and Rajdeep Buildcon Pvt Ltd (RBPL) as the Project Contractor. RBPL has earlier constructed Raxaul and Attari ICPs.

The Government of Nepal handed over unencumbered 90.80 bigha (61.50 Hectares) project land at Nepalgunj (adjacent to the border) to RITES and RBPL on September 25, 2020 along with 24.36 bigha of land for the approach road.

The approach road connecting to the custom point has been delineated and graveled with 60 mt right of way. The land areas allocated for the ICP and the security agency have been fenced with barbed wire.

It should be noted that the facilities at ICP Nepalgunj are planned to cater for the demand projections for the year 2035.