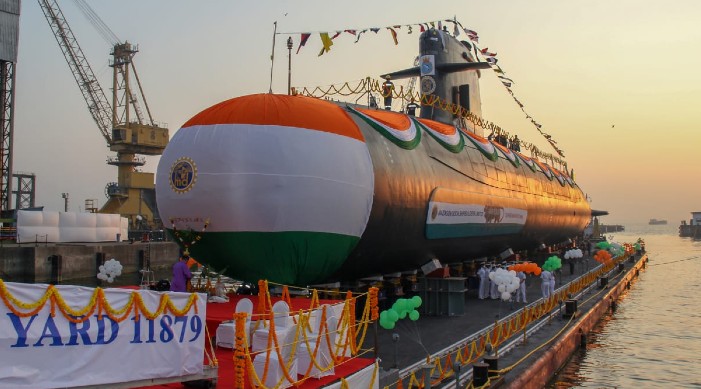 The submarine being launched in Mumbai

The Indian Navy's fifth Scorpene class submarine Vagir was launched at the Mazagon Dock in Mumbai today. The new-generation submarines have advanced stealth features like acoustic silencing techniques and low radiated noise levels. It has the ability to launch a crippling attack on the enemy using precision guided weapons.

Named the Kalvari class by India, it was manufactured by Mazagon Docks Limited as part of the Indian Navy's Project 75 under a 2005 India-France agreement for six Scorpene class submarines. It has been designed by French defence company Naval Group (earlier known as DCNS).


PRO Defence, Mumbai shared a video of the submarine's launch on Twitter.


The Scorpene class of submarines is a new-generation, conventional-propulsion submarine of an intermediate size which is highly capable in terms of mobility. They are suited to a very broad range of operations both in the open ocean and in coastal waters.

They can launch an attack with both torpedoes and tube launched anti-ship missiles, whilst underwater or on surface.

The Scorpene submarines can undertake multifarious types of missions like Anti-Surface warfare, Anti-Submarine warfare, intelligence gathering, mine laying, and area surveillance. The submarine is designed to operate in all theatres, with means provided to ensure interoperability with other components of a Naval Task Force.

Speaking after the launch, Minister of State for Defence Sripad Naik said the development project further cements India as a submarine building nation. He added this was a step towards Atmanirbhar Bharat.

The first Scorpene class submarine, Kalavari, was commissioned into the Indian Navy in December 2017.