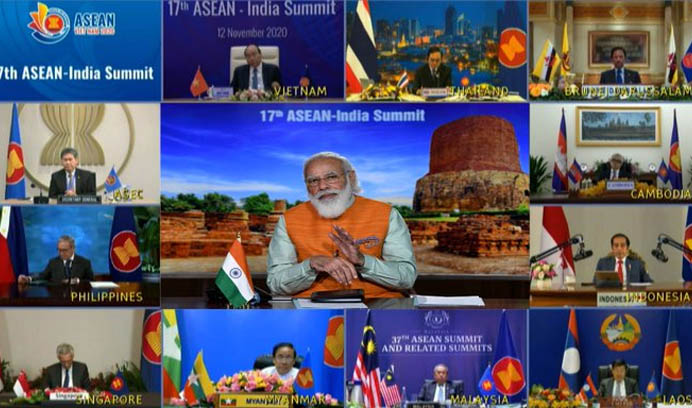 Attending India-ASEAN summit in a virtual format, Prime Minister Narendra Modi on Thursday said enhancing all kinds of connectivity, including in social, digital and financial spheres, with the 10-nation ASEAN grouping is a major priority for India.

“Enhancing every type of connectivity between India and ASEAN from physical to economic to social to digital to financial to maritime is a major priority for us. In the last few years, we have come close to all these areas,” the Prime Minister said.

There is ample closeness between India's “Indo Pacific Oceans Initiative” and ASEAN's "Outlook on Indo Pacific". We firmly believe that a “Cohesive and Responsive ASEAN” is essential for "Security and Growth for All in the Region,” the Prime Minister said.

The Association of Southeast Asian Nations (ASEAN) is considered one of the most influential groupings in the region, and India and several other countries including the US, China, Japan and Australia are its dialogue partners.

India-ASEAN relations stand on a strong foundation of our shared geographical, historical and civilisational links. There has been a great flow of people, ideas and material goods between our two regions dating back to several millennia which has left its imprints on all facets of culture and civilization be it religion, art and architecture, language & literature, cuisine, crafts & textiles, music, dance and drama.

The two biggest religions of South-East Asia spread from/ through Indian subcontinent. The biggest temple of the world is not in India but in Cambodia. The languages of our two regions share a lot of common words including the word 'Bhasha' itself which means language.

The Indian epics of Ramayana and Mahabharata are as popular in South-East Asia as they are in India. Even today, the coronation ceremony of Thai kings is performed with Indian rituals. The traditional medicinal systems of ASEAN countries share many commonalities with Indian Ayurveda. All these tell the tale of long and time-tested cross-cultural influences and interactions in the region.

The breadth of ASEAN-India partnership is covered by a number of Dialogue Mechanisms cutting across various sectors such as defense, commerce, telecommunications, agriculture, energy, environmental issues, tourism etc. Presence of all ten ASEAN Leaders in New Delhi in January 2018, to mark the 25th Anniversary of ASEAN-India ties, testifies to the importance, both sides accord to our Partnership.

India's Act East Policy, which provides the guiding framework, to take forward the ASEAN-India Strategic Partnership to the next level, recognizes connectivity in its broadest sense as the key. Connectivity includes physical, economic, political and people-to-people connectivity.

In 2018, India has offered a USD 1 billion Line of Credit to ASEAN countries for connectivity and infrastructure projects.

ASEAN and India share land and maritime borders and there is a lot of scope for enhancing connectivity through land, air and sea. India-Myanmar-Thailand Trilateral Highway is an ongoing effort to enhance road-connectivity between India's North East and South East Asia.

There is good air-connectivity between India and several ASEAN countries, including Thailand, Singapore, Malaysia and Indonesia. Last year, Indigo and Vietjet started air-services between India and Vietnam. India is making efforts to enhance connectivity in the digital and cyber domain also.

On the economic front, India-ASEAN trade and investment relations have been growing, with ASEAN being India's fourth largest trading partner. In 2019-20, ASEAN-India trade stood at USD 86.9 billion.

India has launched a number of programmes and projects for capacity development and enhancing people-to-people ties. Exchange programmes for students, media personnel and farmers are on-going initiatives. In September 2019, External Affairs Minister and Minister of Human Resource Development launched the 1000 integrated PhD Fellowships programme for ASEAN students at the IITs.

The programme with a total budget outlay of approximately USD 45 million is the single-largest capacity development initiative of India in its partnership with ASEAN. Despite COVID-related disruptions, the admission process of the first batch of ASEAN students has been completed and 25 students have joined classes online at various IITs. India is also working to launch a network of ASEAN and Indian Universities to facilitate the exchange of faculty, students and to undertake joint research projects.

Under the Initiative for ASEAN Integration (IAI), special assistance is being provided to Cambodia, Lao PDR, Myanmar and Vietnam to help them close the development gap with the other ASEAN countries. The Scholarship Scheme in Nalanda University, the Centres of Excellence in Software Development & Training (CESDT) set up in Cambodia, Lao PDR, Myanmar and Vietnam and the Quick Impact Projects (QIPs) for CLMV countries are India's initiatives to strengthen ASEAN integration.

India is also supporting the establishment of a Tracking, Data Reception/Data Processing Station in Vietnam and upgradation of Telemetry Tracking and Command Station in Indonesia, both examples of our cooperation with ASEAN in the space sector.

Under sub-regional cooperation, India has a very active Mekong-Ganga Cooperation (MGC) mechanism with the 5 Mekong countries namely Myanmar, Thailand, Cambodia, Lao PDR and Vietnam. MGC is the oldest sub-regional initiative by any Dialogue partner of ASEAN in the Mekong region. This year, we are celebrating the 20th anniversary of MGC.

India’s community-oriented Quick Impact Projects in MGC countries targeting key social sectors including sanitation, water resource management, elementary education, women empowerment etc., have been praised by these countries. We have completed 29 Quick Impact Projects so far and another 37 are under implementation.

Tourism has been identified as a promising sector of cooperation. The year 2019 was celebrated as the ASEAN-India Year of Tourism to enhance the two-way flow of tourists.

Indian diaspora in the ASEAN region, which constitutes about 20% of India's total diaspora, plays a seminal role in strengthening ASEAN-India ties.

With the Indo-Pacific gaining salience in the global discourse, the partnership between India and ASEAN is poised to achieve new strengths. Prime Minister Narendra Modi, in his speech at the Shangri-La Dialogue in June 2018, highlighted ASEAN-centrality and unity as an important pillar of India's Indo-Pacific Vision.

“The ten countries of South East Asia connect the two great oceans in both the geographical and civilizational sense. Inclusiveness, openness and ASEAN centrality and unity, therefore, lie at the heart of the new Indo-Pacific", the Prime Minister mentioned in his speech.

India was one of the first countries to welcome ASEAN Outlook on Indo-Pacific, which shares a lot of commonalities with India's own Indo-Pacific Vision. India wants to see a strong, unified and prosperous ASEAN playing a central role in the Indo-Pacific region.

With the increasing focus on the oceans as providers of resources, the reservoirs of biodiversity, the highways of global trade and the frontiers of scientific research, cooperation in the maritime domain has become increasingly important under the overall rubric of ASEAN-India cooperation.