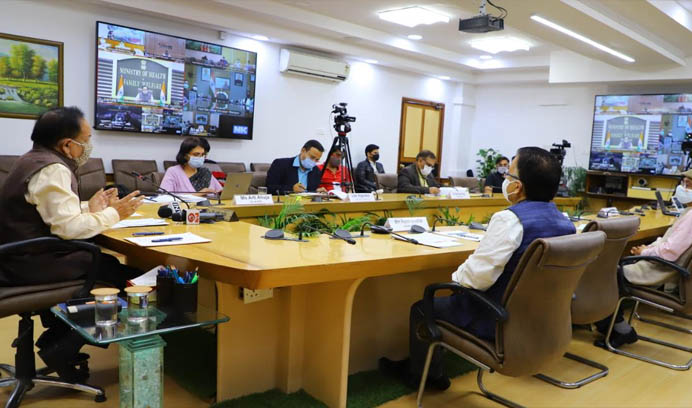 He said that while the daily average of cases has come down, the caseload of active cases remains to be high in some states

“COVID Appropriate Behaviour is the most potent Social Vaccine,” Union Minister for Health and Family Welfare Dr Harsh Vardhan said while stressing upon the importance of Jan-Andolan initiated by Prime Minister Narendra Modi in order to break the chain of transmission.

Highlighting the state-specific areas of concern that would require focussed attention, the minister noted that although the active cases have come down in Maharashtra, it continues to have a large Active Caseload, with a high Fatality Rate of 2.6 per cent which increases to 3.5 per cent in and around Mumbai.

The case fatality ratio in Uttarakhand is higher than the national average at 1.64 per cent. Active cases are on the rise in the recent days in Manipur too, he noted.

In Goa, around 40 per cent of total deaths are recorded in just the last month, he said, calling it ‘a cause of worry.’ With 70 per cent of cases concentrated in Aizawl, Mizoram is seeing a further rise in active cases.

Apart from that, Tripura and Meghalaya are witnessing higher deaths in the active age groups between 45-60 years which are preventable, he said.

He also highlighted the importance of widespread IEC campaigns so that people in home isolation can reach hospitals in time for effective clinical management. He also indicated towards the need for higher testing in areas such as Bazaar, market places, work places, places of gatherings.

The Chief Ministers and Health Ministers of states briefed him about the actions taken by them to contain, trace and treat COVID-19 positive cases.

The Uttarakhand CM stated that they have mounted a comprehensive multimedia IEC campaign for encouraging COVID appropriate behaviour. Challans have been given to 1.4 lakh for faulting on Social Distancing, and 4.5 lakh on mask negligence.

Similarly, Maharashtra Health Minister Tope informed about the 'My Family My Responsibility' campaign in the state of Maharashtra where house to house surveys and monitoring of home isolation cases were undertaken. Of the 5.7 lakh surveyed, 51,000 COVID19 positive cases were identified.