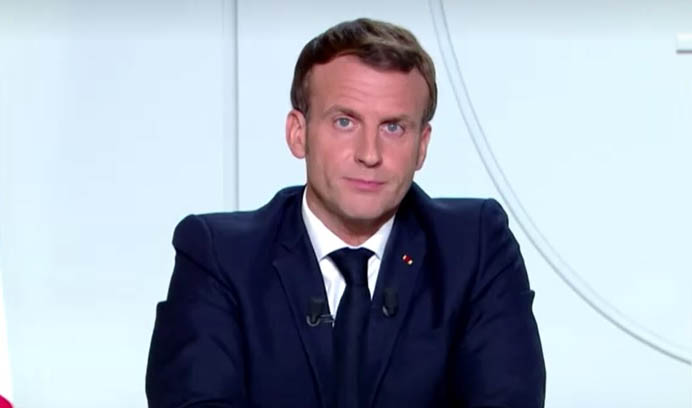 Recent weeks saw a widespread outburst of the people in many Muslim countries against the President of French Republic Mr Emmanuel Macron. In certain cases like Pakistan, the mobs after Friday prayers became uncontrollable and turned violent so much so that the authorities had to deploy a riot force to control the unruly mobs.

The leaders of protesting nations lost no time in denouncing President Macron for what they call “disrespecting the Prophet and humiliating Islamic religion” When the Pakistani Prime Minister, the Turkish President, Malaysia's ex-Prime Minister and other senior leaders orchestrated this allegation, their masses took the cue and brought out huge demonstrations, pledging to protect their faith at the cost of their lives.

Turkish President Erdogan had already around the last week of September entered into a fracas with Charlie Hebdo which had caricatured him not to his taste in one of its issues. Erdogan proved true to Turk arrogance by saying that President Macron should go for mental treatment.

In Islamabad, the national assembly passed a resolution demanding the suspension of relations with France, a boycott of French goods and withdrawal of Pakistani Ambassador from Paris (amusingly no Pakistani Ambassador has been appointed for France). In Afghanistan, the Taliban leadership issued a warning that they could take action if France did not apologize. At many places, the effigies of the French President were burnt and photographs trampled under feet by rowdy crowds to express deep hatred against the French President.

Surprisingly no leader except the Saudi monarch drew the attention towards the actual words uttered by the French President and also the context in which he said it. Since the context did not suit the protestors and their handlers, they brushed it aside and held on to the words they chose to put into the mouth of President Macron.

What the President had actually said was repeated by the French television so that the mischief was neutralized. He had said that France was faced with the threat from Islamic terrorists. He went on to say that France respected all religions and upheld their freedom. He, at the same time, said that France upholds the freedom of expression as well.

This is the crux of Macron’s speech and reading between the lines we find there is no derogatory remark either against Islamic faith or the Prophet of Islam as has been alleged by the protesting masses with surcharged emotions and their leaders. Macron has not said that France has a threat from Islam but from Islamic terrorists which is a statement of the fact.

Not once but a dozen of times Pakistan has said at various world fora, including the United Nations, that she is faced with the threat of Islamic religious extremists. Not only that, did not Pakistan launch the Zarb-e-azab campaign against the Islamic extremists in North Waziristan resulting in the killing of more than seventy thousand people? Has not Pakistan told FATF that it has put curbs on radicals on its soil and even banned their organizations?

It has now become proverbial with the political commentators to say that every Muslim is not a terrorist but every terrorist is a Muslim. That is precisely what Macron meant. We do not find evidence that he disparaged either the Islamic religion or was disrespectful of the Islamic Prophet.

Now as regards Charlie Hebdo and the caricatures, France is a democratic country where freedom of expression is given full respect. The press is free in that country. Now if a magazine, say Charlie Hebdo, has drawn a caricature that has hurt the feelings of a section of people, the proper way to seek justice is to lodge a complaint with the police and take the case to the French judiciary. But nobody has a right to take the law into his hands. Unfortunately, the law has been taken into hand by those who want to be known as Islamic radicals.

The large scale propaganda and tirade against President Macron and France appears to be part of a larger conspiracy of the terrorist elements among the French population. Turkey is nursing rivalry against France in the context of trade and commerce in African countries where France has strong clout. Pakistan is sore why France has been too friendly with India and has agreed to the supply of Rafale fighter planes to her thus boosting her air strike power. France had supported the stand of India during the Sino-India standoff in Ladakh in previous months and still stands by her commitment. Pakistan found a good pretext to give vent to her chagrin and indirectly instigated mob outburst against the French President.

Muslim majority areas in India, too, were stirred by protests as elsewhere but in Lucknow the poet Munawwar Rana and in Aligarh Farhan Zubair, the President of Aligarh Students Union, both have been arrested by the police and FIRs have been lodged against them for spreading hatred and issuing threats that could harm peace. Farhan said that anybody disrespecting the Prophet will be beheaded.

But the crucial question in the context of these protests should not go unnoticed. Islamic terrorists have been active in France. On 7 January 2015, two Islamist gunmen forced their way into the Paris headquarters of Charlie Hebdo and opened fire, killing twelve: staff cartoonists. There was a huge demand for the next issue of the news magazine and no fewer than five million copies of Charlie Hebdo were published and the money went to the succour of the victims. This shows the popularity of the magazine. The French government offered a sum of one million Euros by way of help to the magazine.

On 25 September 2020, weeks after the caricature's republication, two people were critically injured by an assailant during a stabbing attack outside the magazine's former headquarters. A day later, the perpetrator was identified as Zaheer Hassan Mehmood, a 25-year-old allegedly from Pakistan, who claimed to have arrived as an unaccompanied minor refugee in France in 2018. He confessed to his actions and said he had acted in vengeance for the caricature republication. A French teacher showing the Hebdo caricature to students was beheaded by an 18-year old Chechen refugee Muslim carrying a knife.

Of all the countries in Europe, it is France that offered maximal largesse to the Muslim refugees, asylum seekers, immigrants and illegal intruders from the Middle East and North African countries not imposing any restriction on them in regard to education and pursuit of an economic prospectus. French judiciary is known for its just and humane treatment and nobody would have been denied justice if he or she approached the court of law instead of taking the law into their hands. France will protect and uphold her democratic traditions in any case and no power can derail her from what she stands for. This great country has been the model of freedom and liberty for the entire Europe and the world.

Emmanuel Macron faced a backlash when he defended the freedom of expression. European countries and the US have all supported the French President and India, too, expressed solidarity with France in fighting the terrorists globally.

(The writer is former Director of the Centre of Central Asian Studies, University of Kashmir; views expressed are personal)