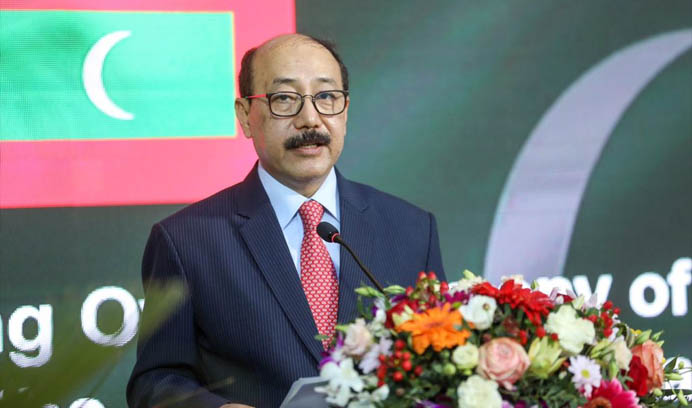 Praising President Ibrahim Solih-led Maldives government for its ‘India First’ foreign policy, Foreign Secretary Harsh Vardhan Shringla who is on a two-day visit to the strategically important Indian Ocean country on Monday said India’s cooperation will always be focussed on the welfare of the people and based on the requirements and priorities of Male.

“Prime Minister (Narendra Modi) during his visit to Maldives in June last year said ‘Neighbourhood First’ is our priority; and in the neighbourhood Maldives is priority’. PM Modi also said that India’s cooperation will always be focussed on the welfare of the people and based on the requirements and priorities of Maldives. It is no coincidence therefore that Maldives was the first and the largest recipient of India’s Covid-19 assistance in our neighbourhood,” the Foreign Secretary said while speaking at Maldives’ Ministry of Foreign Affairs.

During Harsh Vardhan Shringla’s visit, the two countries signed two MoUs; one, on cooperation in sports and youth affairs and another, for a US $100 million grant to fund the Greater Male Connectivity Project (GMCP), considered to be the largest ever-such infrastructure project undertaken in Maldives. India will also provide a $400-million line of credit for the GMCP.

“The MoUs which we have signed today are emblematic of our strong development partnership which is multi-faceted and designed to meet specific requirements of the Government and people of Maldives,” Shringla said.

Greater Male Connectivity Project is among the several large-scale projects being carried out in the Maldives by India, which include infrastructure projects such as port, roads and reclamation, expansion of airports, building of a new cricket stadium and cancer hospital and development of fisheries.

“We feel these projects will change the economic landscape of the Maldives and bring greater prosperity to the people,” said the Foreign Secretary who also presided over gifting of children’s parks for 67 islands which are dispersed from the North to the South.


Foreign Secretary @harshvshringla reviewed the full spectrum of #IndiaMaldives cooperation with Foreign Secretary Abdul Ghafoor; both apprised each other of the respective national approaches to deal with Covid-19; positively assessed the robust growth in our bilateral ties. pic.twitter.com/cEeDxqu5IL

According to the Ministry of Foreign Affairs in the Maldives, both sides further discussed ways to boost tourism and elevate connectivity and bilateral trade.

Notably, India has unveiled a slew of measures to boost economic recovery in the Maldives, where the tourism industry has been hit hard by the pandemic. In September, India provided a soft loan of $250 million as budgetary support.