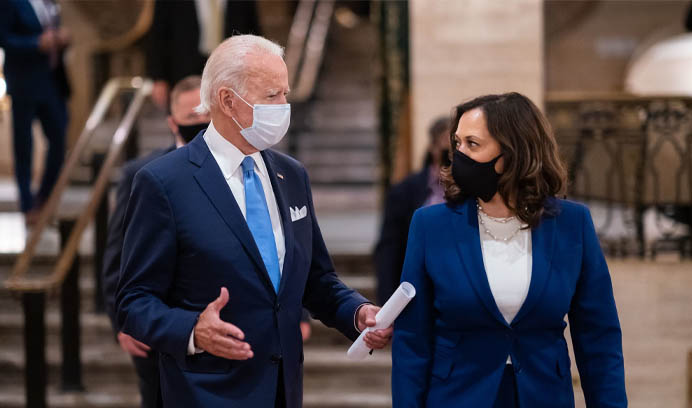 As soon as the news of Democratic Party winning the election came in, Indians including family members of Harris started celebrations.

And it happened. The United States Presidential Elections 2020 finally concluded with the Democratic Party emerging as winners. This election was a special one as it saw Indian-African-American Kamala Harris becoming the Vice President-elect of the United States, the first woman in US history to have made it to the position.

For India, the moment was even more special as it is the first Indian-origin person to take up such a big post. As soon as the news of Democratic Party winning the election came in, Indians including family members of Harris started the celebrations.

Among the Indians celebrating the fact, was the Prime Minister Narendra Modi who called it a moment of pride for all Indian-Americans.

PM Modi wrote, “Heartiest congratulations @KamalaHarris! Your success is pathbreaking, and a matter of immense pride not just for your chittis, but also for all Indian-Americans. I am confident that the vibrant India-US ties will get even stronger with your support and leadership.”

Heartiest congratulations @KamalaHarris! Your success is pathbreaking, and a matter of immense pride not just for your chittis, but also for all Indian-Americans. I am confident that the vibrant India-US ties will get even stronger with your support and leadership.

One of the happiest among all was Kamala Harris’s extended family. NDTV reported that Dr Sarala Gopalan, Harris’s aunt who lives in Chennai said she was ‘happy and thrilled’ to hear her speech in which Harris paid tribute to all women who fought and sacrificed for justice for all.

“We always knew Kamala was going to win (but) I am yet to speak to her,” Dr Sarala Gopalan told NDTV. “Even when she became Senator (in January 2017) our family visited her,” NDTV quoted Dr Sarala Gopalan saying.

She even offered100 coconuts to a temple in Chennai's Besant Nagar a few years ago after she won the senator's seat. She said, she plans to travel to the family's ancestral village - Thulasenthirapuram - to offer thanks to the family deity, NDTV reported.

“My dad and mom too would have been proud of their granddaughter,” NDTV reported her saying.

Similarly, The Indian Express, reported Kamala Harris’ maternal uncle, 80-year-old Gopalan Balachandran saying, “I am very proud of Kamala, I will call and congratulate her soon… My phone hasn’t stopped ringing since the news came out.”

According to The Indian Express, the rest of the Harris’ family in India will be flying to the US to attend the swearing-in ceremony in January next year.

He told The Indian Express, “My daughter is already there, helping Kamala with her campaign. All of us will fly down… I wouldn’t miss it for anything.”

Talking to Deccan Chronicle, Balachandran said, “I am glad the suspense is over. I was confident that Biden-Kamala would emerge victorious in the elections. It is not a surprise for me.”

“There is no outstanding issue between the two countries. I think the new US regime will continue to strengthen its relationship with India,” he told Deccan Chronicle.

The ancestral village of Harris in Tamil Nadu also burst into celebrations after the news of Democratic Party’s win broke.

LiveMint wrote that the locals in Thulasenthirapuram and Painganadu villages “ushered in an early Deepavali with firecrackers and sweets” to celebrate her win.

The villagers had earlier held special prayers for Harris' win and once they were answered, celebrated it with much fanfare, LiveMint said.

“A local at Painganadu who drew a large 'kolam' (Rangoli) was all smiles when she hailed the victory of the "woman of our house,” it wrote. The locals can also hold special prayers later to celebrate the occasion, the report said.