India will not accept any shift in LAC: CDS Gen Rawat 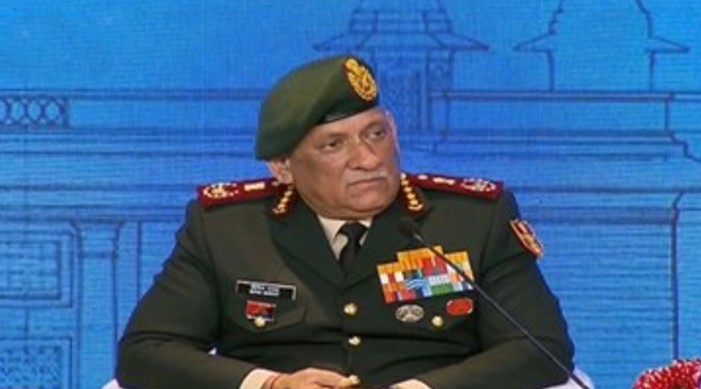 ‘Our posturing is unambiguous, status quo has to be restored and we will not accept any shifting of the LAC,’ Gen Bipin Rawat said

Chief of Defence Staff General Bipin Rawat on Friday said India would not accept any change in the Line of Actual Control and that status quo has to be restored.

While underlining “a full-scale war” with China is low on probability, he said border confrontations, transgressions and unprovoked tactical military actions spiraling into a larger conflict can’t be ruled out.

The CDS was speaking at a seminar to mark the 60th anniversary of National Defence College and such strong statements came when India and China were engaged in the eighth round of senior military commander-level talks at Chushul in eastern Ladakh to carry forward their talks for de-escalation of tension on the Line of Actual Control.

The Indian side at the commander-level talks, which started at 9.30 am, is led by Lieutenant General PGK Menon.

The CDS said, "The People's Liberation Army was facing unanticipated consequences of its misadventure in Ladakh because of Indian Army’s firm and strong response”.

“Our posturing is unambiguous, the status quo has to be restored and we will not accept any shifting of the LAC,” the CDS reiterated.

With regard to the threat posed by both China and Pakistan, General Bipin Rawat said, “India faces myriad external security challenges.”

He also maintained that “constant friction with two of our nuclear armed neighbours with whom India has fought wars” are “increasingly acting in collusion” and it “poses an omnipresent danger of regional strategic instability with potential for escalation, threatening our territorial integrity and strategic cohesion”.

He said “persisting boundary dispute, China’s support to Pakistan, it’s increasing influence in South Asia through BRI projects and an unbalanced economic relationship is likely to ensure that in near future the Sino-India relationship will remain a fundamentally competitive one.”

Talking about China’s aggression and economic slowdown triggered by Covid-19 pandemic, he said, “The economic slowdown due to the pandemic has made China repressive at home but aggressive abroad as is evident through its posturing in South China Sea, East China Sea and the Taiwan Straits. For India, the challenges have manifested with military flare-ups along the LAC.”

“In the coming years we are likely to witness aggressive pursuit of hegemonic interests by China manifesting through economic exploitation of weaker nations, military modernization and increased contestation with the West,” he added.

Talking about the reforms needed in the Indian armed forces to be prepared for the future, Gen Rawat said in the “emerging security paradigm armed forces should be structured in a manner that they provide the operational flexibility to pursue wider strategic objectives as well as resource optimization”.

He said, the foremost reform that is to be adopted is to have “integrated Theatre Command system, which has the potential to unlock critical core strengths within the three services, to bridge limitations and complement each other’s competencies in battle to realise the full potential of our combat power.”