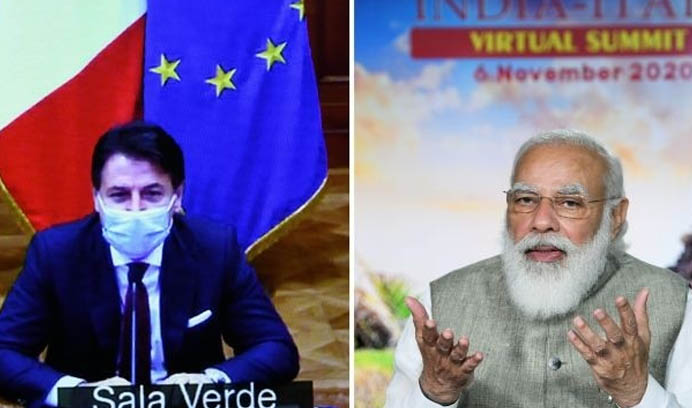 India and Italy recognized the importance of regular defence exchanges between the two countries and underscored the need to further expand defence engagement through greater two-way collaboration and technology cooperation, co-development and co-production by expediting discussions through the Joint Defence Committee and Military Cooperation Group.

The two countries also welcomed the steady strengthening of defence cooperation between the two countries and recognized the need to consolidate defence relations with the aim of enhancing the effectiveness of peacekeeping activities within the framework of the United Nations.

Such decisions were arrived at during the virtual summit between Prime Minister Narendra Modi and his Italian counterpart Giuseppe Conte on Friday.

As per Sandeep Chakravorty, Joint Secretary in the Ministry of External Affairs’ Europe(West) division, this was the 5th interaction between the two countries at the prime ministerial level in the last three years.

The MEA official also informed the media that Prime Minister Modi was scheduled to visit Italy this year in May at the invitation of Italian Prime Minister Conte but due to the Covid-19 pandemic the visit could not materialize.

Highlighting the importance of the bilateral summit between India and Italy, MEA Joint Secretary Sandeep Chakravorty said, “The objective of the meeting was to build on strong political understanding and foundations the two countries enjoy and build on it economic and bilateral infrastructure of ties between the two countries.”

The two countries that signed 15 MoUs during the summit, which included an agreement between India’s Cochin Shipyard Limited and Italy’s Fincantieri S P A on design, shipbuilding and manufacturing, also issued a Joint Statement and Plan of Action 2020-2024.

As per the Joint Statement, the two leaders during the summit condemned terrorism in all its forms and manifestations. Consistent with relevant Resolutions of the United Nations, both sides support a comprehensive approach in preventing and combating terrorism, based on respect for human rights and fundamental freedoms, the rule of law and international law.

They expressed satisfaction at the meetings of the India-Italy Joint working Group on Counter Terrorism and their cooperation in multilateral fora. Both sides agreed to hold the next meeting of the Working Group to further advance cooperation, exchange of expertise and capacity building in countering terrorism and transnational crime in 2021.

Both leaders pledged to strengthen cooperation in the fight against terrorism and transnational crime both at bilateral level and in multilateral fora.

The two leaders reaffirmed the crucial role that connectivity plays in promoting economic growth and people-to-people contacts in the 21st century. They stressed the importance of the Indo-Pacific region as a fundamental area for connecting Asia and Europe and stated their Countries’ willingness to support all connectivity initiatives based on internationally recognised norms and standards, good governance, rule of law, inclusiveness, transparency and level-playing field.

The two Prime Ministers acknowledged the potential of new international organizations such as the Coalition on Disaster Resilient Infrastructures (CDRI) and the International Solar Alliance (ISA). India welcomed Italy as a founding member of CDRI. India looks forward to Italy joining ISA after coming into force of the universalisation of ISA. India welcomed Italy’s engagement in the Indian Ocean Rim Association (IORA) and Italy’s new status as Development Partner of ASEAN

The two leaders acknowledged the untapped potential of bilateral industrial partnership and projects and encouraged respective “national champions” and SMEs to explore new avenues of cooperation. The two leaders deeply appreciated holding of the High Level Economic Dialogue at the level of CEOs of Indian and Italian companies on October 28, 2020 and ministerial interaction on November 2, 2020 prior to the Summit.

They agreed to promote innovative financial schemes capable of supporting bilateral investments. In this context, signing of MoU between Cassa Depositi Prestiti (CDP) and National Infrastructure Investment Fund (NIIF) was welcomed by both leaders.

They affirmed their commitment to work closely on common priorities and a development oriented global agenda for their respective Presidencies of the G20 in order to address, inter alia, the impact of and the response to Covid-19 in all the relevant domains. In the framework of the G20 Troika, G20 Sherpas of the two countries will hold regular consultations to take stock of activities and work towards an agenda that includes common priorities for the two Presidencies of the G20 and for their legacy.

The two leaders emphasized the importance of the consecutive G20 Presidencies that Italy and India will hold in 2021 and 2022 respectively, which will offer a significant opportunity to provide continuity in the fight against the pandemic and in addressing all other major issues of global governance.

They welcomed the coordination which has been established through their relevant government offices in order to harmonize Italy’s and India’s respective agendas, aimed at ensuring an inclusive recovery resulting in strong, sustainable, balanced, inclusive and resilient growth and promoting human, environmental and economic well-being.

In the framework of their greater coordination on global issues, the two Countries reaffirmed their commitment to the implementation of the United Nations Framework Convention on Climate Change (UNFCCC) and its Paris Agreement and their respective nationally determined contributions.

They also reiterated their commitment to cooperate in the field of disaster risk reduction and management, both at bilateral and multilateral level. The two leaders also highlighted the significance of cooperation in the run-up to the 26th Conference of Parties (COP26) of the UNFCCC, which will be organized next year by the United Kingdom in partnership with Italy.

Both leaders underlined the strong solidarity existing between Italy and India in supporting each other’s candidatures within multilateral fora, as further evidence of their shared responsibilities in global governance.

The two Prime Ministers noted with satisfaction the successful completion of 15th India-EU Summit held in July 2020 and expressed their shared commitment towards implementation of the “India-EU Strategic Partnership: Roadmap to 2025”.


They agreed that the implementation of the Roadmap will further intensify India-EU partnership in several areas including trade, investment, connectivity, digital technologies and climate.

They stressed upon the need for India and the EU to actively re-engage towards an early resumption of negotiations for mutually beneficial India-EU Trade and Investment Agreements. The two leaders agreed to work closely together for the success of the 16th India-EU summit to be held in 2021.

During the summit, the Italian Prime Minister thanked India for extending support to Italy during the pandemic by supplying medicines and personal protection equipment (PPE).

Both leaders agreed that the pandemic has severely challenged the health and economic capabilities of all countries. The two Leaders concurred that the Covid-19 pandemic calls for an inclusive multilateral approach to health protection, especially in the framework of the United Nations and the World Health Organization. In this context, they stressed their governments’ readiness to enhance consultations for cooperation in the health sector.

The Italian side highlighted the first results reached by the global initiative “ACT-Access to COVID-19 Tools Accelerator”, including the Covax Facility, to guarantee fair and universal access to diagnostic, therapeutic and vaccines. The two Leaders also welcomed the Global Health Summit, which will be held in Italy in the context of the Italian G 20 Presidency in 2021, in cooperation with the EU Commission.

During the summit, where talks between the two leaders lasted for an hour, the two sides recognized that scientific cooperation between States is paramount to this end and reaffirmed their will to work together. They welcomed the progress made under India-Italy Science and Technology Cooperation and noted with satisfaction the implementation of various S&T activities under India-Italy Executive Programme of Cooperation.

Both leaders acknowledged the importance of space cooperation for peaceful purposes and suggested that the Italian Space Agency (ASI) and the Indian Space Research Organization (ISRO) implement their cooperation by expanding some areas of common interest such as earth observation and related applications, disaster management, space science and exploration.

They welcomed the establishment of Thematic Working Groups as a method of work between the two agencies as well as the creation of the first joint ASI-ISRO working group in the heliophysics field involving experts and scientists from both countries.

The two Prime Ministers reaffirmed their resolve to further promote people-to-people exchanges between the two countries, particularly through youth and student exchanges. Both leaders underlined the importance of enhancing cooperation in the tourism sector to encourage and facilitate the visits of tourists to each other’s country.

The two Prime Ministers stressed the need to further strengthen the opportunities for tourism, culture and educational collaboration, and decided to organize culture festivals as India in Italy in year 2021 in Italy and Italy in India in year 2022 in India.

They reiterated their strong commitment to further consolidate friendly and amicable bilateral ties and agreed to intensify engagements at all levels.

Interesting aspect of the bilateral summit, as per the MEA official was Italian Prime Minister Conte inviting Prime Minister Modi to participate in 700th death anniversary of poet Dante Alighieri next year. Known as the Father of the Italian language, poet Dante, as per Prime Minister Conte, had made several references to India and in particular River Ganga in his pre-eminent work ‘Divine Comedy.’