Peace can only be ensured through ability to deter war: Rajnath Singh 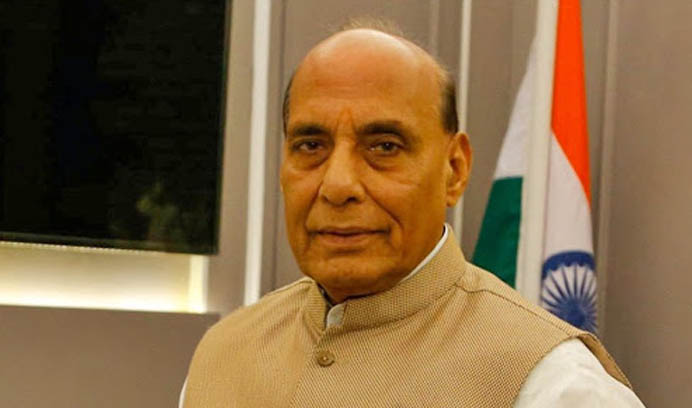 Even as India wants peace with China and Pakistan in order to have friendly atmosphere in the region, they have overlooked New Delhi’s initiative

As tension with China in eastern Ladakh remains unabated, Defence Minister Rajnath Singh on Thursday said peace can only be ensured through the ability to deter war.

“Perhaps, the most fundamental lesson that the roller coaster of the rise and fall of nations taught us was that peace cannot necessarily be achieved by a desire for peace but by the ability to deter war,” the Defence Minister said while delivering a keynote address after inaugurating Diamond Jubilee celebrations of the National Defence College.

“Unfortunately, the mere desire to seek peace, if not reciprocated by others, does not necessarily succeed in building a harmonious environment in a world beset by conflicting ideas of security, sovereignty and national interests,” Rajnath Singh said.

He was alluding to India’s consistent efforts to have peace with China and Pakistan in order to have a friendly atmosphere in the region, but both have overlooked New Delhi’s peace initiative.

Outlining four broad principles that are likely to guide India’s quest for national security in the future, he said, “The first is the ability to secure India’s territorial integrity and sovereignty from external threats and internal challenges. Second, the ability to create secure and stable conditions that can facilitate India’s economic growth, thereby, creating the resources for nation building and to meet individual aspirations. Third, we remain steadfast in the desire to protect our interests beyond the borders in areas where our people reside and our security interests converge. And finally, we also believe that in a globalised and interconnected world, a country’s security interests are interlinked by shared and secure commons.”

Rajnath Singh emphasised that India has proved that countries that employ terrorism as an instrument of national policy can also be deterred through options that were considered un-implementable in the past.

He said “Pakistan continues to remain adamant in the use of terrorism as state policy. However, we have achieved substantial success in working with progressive and like-minded countries to not only expose Pakistan’s regressive policies but also make it increasingly difficult to continue with its previous business as usual approach.”

The Defence Minister outlined India’s close relationships and partnerships with like-minded friends to further the common interests of countries in the region and beyond.

“Our strategic partnership with the U.S. is stronger than ever before.” India’s friendship has also grown tremendously with Japan, Australia and Russia. India has also forged a very special partnership with reliable friends like France and Israel, he added.

One of the most important elements of India’s foreign and security policy is characterised by the “Neighbourhood First” initiative, he said.

“Right from 2014, Prime Minister Narendra Modi invested substantial personal capital to ensure that this relationship was built and reinforced to create a positive and progressive partnership. The results of this initiative are evident. With the exception of Pakistan, given its agenda of fuelling terrorism, India has improved its relations with all neighbours. We have invested heavily to help and support our friends to forge a relationship of mutual-respect and mutual-interest,” the Defence Minister said.

“It is a result of this initiative that we have enhanced the scope and quality of our relations with Saudi Arabia, UAE and Oman in the West and with Indonesia, Vietnam and South Korea in the East. I see this trend further being enhanced over the next decade,” the Defence Minister said.

Talking about India’s capability development and long term policy of indigenization, he said, “Our recent procurement policies encourage forging partnerships with major OEMs who are keen to invest and build in India. Our vision for Make in India for defence manufacturing is being implemented with the long-term of making India more self-reliant,”

Speaking about the evolving and changing character of war, the Defence Minister said, “A large number of initiatives have been undertaken by us in the recent past in this regard. At the structural level, India has a more closely interlinked and coordinated security network. We have not only made the appointment of Chief of Defence Staff, CDS, and established the Department of Military Affairs, but are also in the process of further integrating the armed forces through both theatre and functional commands.”

Talking about internal security challenges, he said, “A three-pronged approach has been undertaken. “This includes development of areas affected by terrorism along with the provision of justice to the aggrieved. It also includes the ability and desire to go more than half way to negotiate settlements with dissatisfied groups to enable a political settlement. And finally, we are also willing to challenge the status quo, if the status quo becomes a tool for the exploitation of helpless citizens and the provisions of governance.”

On the larger issue of economic security, the government has focused on all aspects of development in sectors of land, labour, capital and industry, the Defence Minister said.