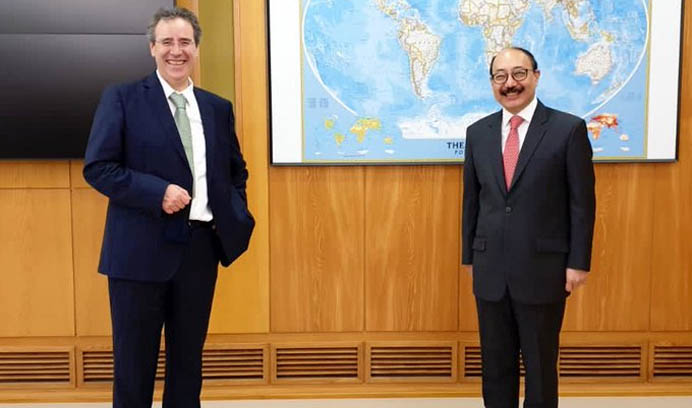 Some countries are the fountainhead of terror yet claim to be its victims to gain international sympathy, he said

Reaching Germany in the second leg of his three-nation European tour, Foreign Secretary Harsh Vardhan Shringla on Monday had a packed schedule in Berlin with government interlocutors at the Federal Chancellery and the German Foreign Office.

During the meeting, his talks with German officials largely revolved around economy, trade and investment, terrorism and others. With both the countries on the same page on the issue of terrorism, the Foreign Secretary expressed his deep anguish and shock over terror attacks in France.

While maintaining that terrorism is threat to “our common democratic values and freedom of expression”, he said, “India has strongly condemned these acts of terror and expressed solidarity with President Macron and the people of France.” He said the terror attacks in France “vindicate our long term assertion that terror knows no boundaries.”

He expressed his disappointment that while terrorists are united in purpose and action, civilized and democratic countries who are the victims of terrorism are yet to stand united against the menace of terrorism.

“Unfortunately the terrorists are united in purpose and action while we the victims are yet to be so. Ironically some countries who are the fountainhead of terror are practicing dissimulation and claiming to be victims of terror to gain international sympathy. We should be aware of these moves and learn to call a spade a spade,” the Foreign Secretary said during his meeting with German government interlocutors.

In the course of his talks, he reminded them as how the use of sophisticated networks both underground and on the internet—has strengthened terrorism. In view of this, “It enjoins upon all of us, like minded countries, to work together to disrupt these networks and ensure that terror doesn’t succeed. There can be no justification for terror under any circumstances. But we note with some satisfaction that the world is increasingly realizing it and working with us on this,” the Foreign Secretary maintained.