‘German companies can find in India everything they are looking for’: FS Shringla 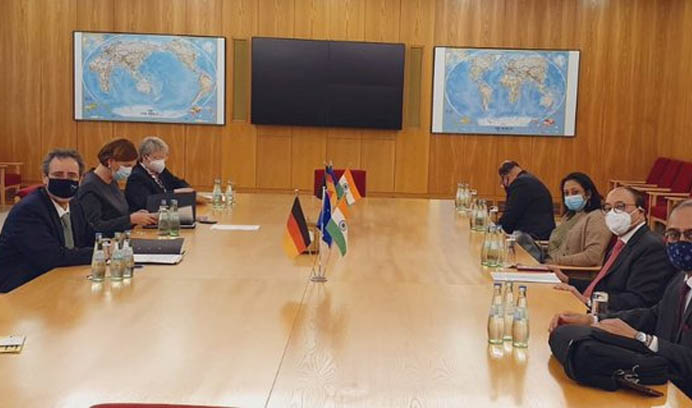 India has the fourth largest start-up ecosystem after US, China and the UK

While reiterating that India places economic reforms at the centre of its agenda, Foreign Secretary during his meetings with German government officials in Berlin on Monday said “German companies can find in India everything that they are looking for.”

“One of the fastest growing economies, the fourth largest start-up ecosystem after the US, China and the UK, with 21 unicorns, and a large and growing market. India’s rapidly growing digital sector has one of the largest data ecosystems in the world. These are all high on the priority list for German industry,” the Foreign Secretary said.

He expressed his disappointment that despite the combined size of India and Germany’s economies being more than 5 trillion euros, “our bilateral trade volume is only around 19 billion euros, which means that there is massive potential for trade.”

With India and Germany being tech-driven economies with a major focus on adopting the principles of Industry 4.0, Artificial Intelligence and others, he said these provide immense scope for collaboration between the two sides.

He said India has faced multiple challenges in the recent months due to the pandemic, “tensions on our northern border and the ever-present menace of terrorism on our western border.”

The Foreign Secretary also said despite initial shock to the economy on account of the lockdown, “we have managed to bring the country back on the path to growth and development. This was possible because the Government of India took hard decisions that were essential to reform the economy.”

Overall, this will be a tough year, but consumer sentiment and investment have shown an appreciable uptick as lockdown restrictions have eased.

Maintaining that India and Europe, and Germany in particular, enjoy fundamental synergies, he said today, India has a government that places reforms at the centre of its agenda and which is working to bring about major structural changes in the economy so that the country becomes even more attractive for investments.”

He said among measures that the government has taken recently are greater liberalisation for MSMEs and enhancing their ability to access finance.

The Foreign Secretary also cleared the air by saying that
Prime Minister Narendra Modi’s call for “Atmanirbhar Bharat’ is not a protectionist slogan, but rather a call to “strengthen our physical and legal framework related to infrastructure, land and labour. This will make India a preferred partner for global supply chains.”

However, he expressed his satisfaction that Germany’s Indo-Pacific guidelines recognise the need for it to diversify its supply chains as New Delhi and Berlin have a clear convergence of interest in this area.